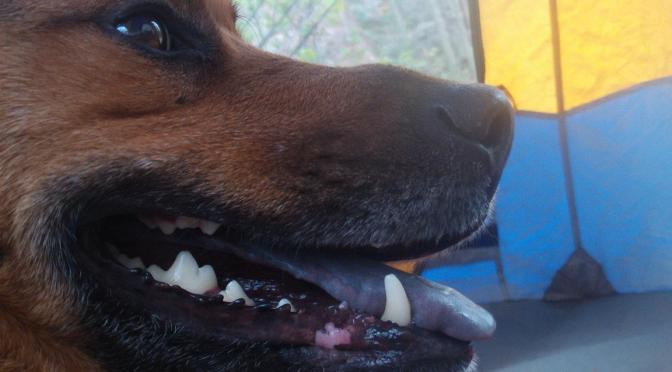 Yesterday I was numb.  My mind was empty.  I did a lot of pacing.  I used what mental strength I had to imagine kissing the black spot on Claddagh’s head, right where the third eye sits.  I imagined the way her hair spread across her face, and in what position she may be laying depending on where I was looking.

There is a ghost in my mind, that I am trying to materialize, and I know that it’s futile.

A recent acquaintance asked if I would like to go hiking tomorrow.  My folks suggested I take a few days and go to the mountains and write, or to at least take a walk.   At the moment I can’t bare the thought of going back to nature without my nature buddy. I mean, what would I even do once I got there?  Deep down I know that nature is my solace and I feel at most peace in the mountains.  I know that when I get there it will be hard to think about this pain in the same way that I am currently thinking about it, surrounded by the reminders of  this ordinary life we had been living.

Who will keep me warm at night, if I choose to camp?  Who will I share my meal with once that big meaty steak is done cooking over the open flame?  Who will alert the bears and beasts that we are peacefully sharing the space of nature for a few days?  Who will alert me when something suspicious- this way comes?

I know that I never really thought of Claddagh as “protective”, there was never any real reason for her to have to step into that role, and I really feel like she trusted me to be the protector.  When I think of going back to nature for long periods of time without her, I feel a sense of fear, despite the seemingly carefree nine years I was roaming and camping on my own before she came into my life.  I became incredibly comforted by her company.

When we were on our three month camp out, she wandered away from the camp site enticed by the smell of horse manure on the near by trails.   Frantically I called her back.  I walked around calling her and eventually I her her sharp cries in the distance.  I kept calling and walking until I honed in on her howl.   I found a distant campsite with a van and a tent.  Claddagh was tied to a tree with a rope, and an old drunk Native man sat on a near by camping chair.

I asked him why he had my dog tied to the tree, she was obviously responding to my calls.  The man said nothing, so I angrily walked to the tree and untied the rope.  Claddagh and I walked by to our site, side by side.

Claddagh was always more fun to walk with off-leash.  She was really good about either walking right by my side, or running up ahead about twenty feet and then stopping and waiting to for me to catch up.  I use to enjoy playing statues with her.  She would run up ahead and just as she would turn around, I would freeze in position.  I would hold it until she ran back to me to see why I wasn’t moving, and then I would just resume walking and we would do it all over again.

A few years ago we went out and my car battery died.  We walked the long dirt road back to Happy Jack and just hoped that some one would help.  Happy Jack looked desolate and the weather was turning dark and stormy.   Just as we approached the asphalt a big green truck drove by and I started waving frantically.  They pulled over and turned around.  Two kindly older gentlemen were in the cab.  They worked for Game and Fish and were happy to assist me and Claddagh.  We hopped in the back seat and they drove us back to the site and proceeded to jump my car.

I started packing up, and shared my last two Red Stripe beers with the men, who had never heard of Red Stripe before.  They gave Claddagh some treats, and were on their way.

It’s like I’ve always had “Angel Power”, but Claddagh amplified it.  We had double Angel Power between the both of us and often times it felt like things turned out the best for both of us, because she was there.  I think people subconsciously know that the way a dog acts, says a lot about the owner.  If you feel you can trust the dog, you can probably trust the owner.

More than once we were invited to stay with strangers who ended up being wonderful hosts.  It takes a special kind of person to invite an unknown person with a dog into their home, around their children.  We were blessed to have those kinds of experiences.

Claddagh and I didn’t go on many group camp outs.  One of the last ones was July 4th, probably four years ago now.   There was a rather large group of us, and almost everyone had a dog. I was so proud of Claddagh getting along with everyone.  There was one dog, belonging to a friend, who was younger and less adapted than the rest of the dogs in the group.  He really wanted to get to Claddagh, and it was slightly problematic, yet she wasn’t giving into violence.  I was hoping that we were entering a new maturity phase where it might be easier to be around more dogs without causing anxiety.

I was able to see that play out a couple of times as home, when an occasional lost dog would end up in our yard.  If they were friendly and tagged I would bring them into the back yard until I could figure out where they lived.  Claddagh would casually share the back yard, peeing on their pee, sniffing what the guest would sniff.  One time, a guest dog was super playful, and they ran around together, playing for the fifteen minutes it took for the dog’s family to arrive.

In all reality, I felt safer having Claddagh with me.  I haven’t really tested my fears in recent years, and it’s a scary prospect at re-exploring that side of me that has been dormant.  I’m not sure how I will be able to step back into it.

The idea to go camping came up a few weeks ago, and I really did want to go with Claddagh, but what I said was “If I go up to the mountains, I’m not going to want to come back down.”   That is really how I felt, that if we were to go back up there, that, that is where we would want to stay forever.   It’s like going back to the place you had a honeymoon, only you are returning solo.  All the magic that place may have held is no longer the same place.  You feel a haunted feeling, you see the ghosts of the past at every turn.  You turn to comment on the scene only to realize you are talking to yourself.