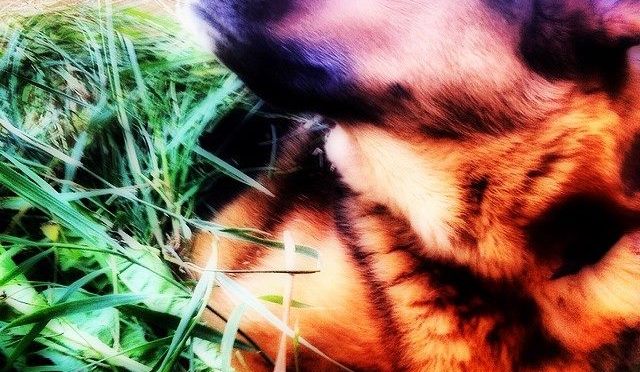 In any relationship there is compromise.  Especially if you are living together.  I only had a handful of info when it came to Claddagh/IMA/Pasha’s past.   She was found and surrendered on a Reservation.  She may or may not be spayed.  She had BB’s or some sort of shrapnel scattered on various parts of her body.  She was picked up by a person who already had four dogs, and kept Claddagh separate because the situation was “iffy.”

I always got the feeling she was raped by another dog.  She was very concerned about other canines getting in that area and sniffing around.  She seemed somewhat evolved when it came to assessing another dogs intentions.    I use to joke that she was a lesbian who only liked fixed males and females, because they were less of a threat.

I don’t actually know, but this is the feeling I got from watching her behavior.   She wasn’t a “Dog’s Dog.”   She was  a PuppyCat that wanted to be Human.  Okay, I know we anthropomorphize animals and I have a vivid imagination, but something told me she was no run of the mill dog when it came to social graces.

She didn’t want to fight, but she was willing to defend herself.   Mostly she wanted to play but found it hard to find other dogs who know the rules.  The dogs who knew the rules were dogs of friends.   We, as a group, had subconsciously created a frame work for a dog community.  The people who had dogs, were much like me.   Safety first!  Good Friendly Play!

I haven’t heard Claddagh’s voice in over twenty four hours.  I am restraining myself from running outside to call her in.  I keep making attentive notices that the scratching I hear on the concrete, is not her toe nails. My neighborhood is significantly more quiet without the dog barking battles over the fence.  Brody gives it a go and then gives up after a bit.  I guess it isn’t as fun without a friend.  Now it’s just one tiny dog on one side of the fence, and a bigger, louder dog on the other.  Who knows… maybe Brody is telling the neighborhood dogs that there will be one less voice in the mix of calls that saturate the air at any time of day.  One less shit pile to smell.

I think Claddagh had a prerogative of fun. I never felt like I could rely on her to protect me. I never wanted to put her in situations that might lead to harm.  I would avoid situations like that at all costs, especially after the dognapping incident.

She would be with me four years before she could look me straight in the eyes.  It would be just as long before she learned or discovered how to bark.

My friend Cameron and I were on a camp out.  Claddagh and I had camped together many times before this. She would follow along quietly when I played “ninja in the forest.”  Taking her collar off so that the jingle of her tags wouldn’t distract other animals.  We would sneak up on loud camp sites and check them out from the perimeter and then hike back to our camp.  We would try and trail deer.  I was secretly training her for the apocalypse.

Anyway Claddagh, Cameron and I go on a camp out.  And into the darkness of night we sit around the fire, and Claddagh stirs.  She walks out about ten feet from the fire, her ears peaked and moving around like satellite dishes. She makes her first attempt at barking, her voice cracking like a teenage boy during puberty.  She seems shocked at the noise coming from her own mouth.  I hear coyotes in the distance.  Claddagh gets a hang for this new call, and she rolls with it, barking her ever loving head off.  I am amused and astounded… I thought I had a “barkless dog.”  She proved me wrong while simultaneously slipping into a whole new maturity. Still, she never manifested into a physical protector.  We were battling a spiritual thing, and her physical body obviously took the brunt of effect.

Claddagh rarely looked “happy.”  In all reality both her and I suffer from Resting Bitch Face.  It looks pensive, introspective, concerned, and perhaps a little distraught.  Upon meeting, we both knew that we came with baggage, but it didn’t matter, it was “for better or worse.”

I never felt “safer” for her being there, but I did feel a concern of care that made me utilize all of my senses in order to keep us both safe.  Intuition and psychic bond were paramount in our relationship, probably even more so than many human relationships. We bared every season in almost every condition, side by side.  I would spend my last dollars on food for her and go hungry.   She was always a good visitor, and no one ever told us that we couldn’t come back.

I think back to Kelty Krumb. I think about how he was the last dog to persuade me into  having a dog of my own.  How he eased me into dealing with animal hair in every nook and cranny of house and home.  I think he would have liked Claddagh. I think about how my heart broke when I learned he was gone, and how much that must have hurt his owner.  I think about how amazing a dog can be and how if they are amazing enough, they will convince other people to become dog owners by setting an almost unreachable height when it comes to canine perfection as assumed by humans.

Claddagh did that to people.  People who had never had a dog before, became enamored by her very quickly.  Her perfection would settle in the imagination of those who dreamed what it may be like to have a dog.  I didn’t hesitate to tell people that it was years in the making by observation and appreciation.  I told them that she was with me everyday, and that my life continued to be unconventional in order to facilitate the reality we were living.  Most times people shrugged off that part.  They thought they could just go all willy nilly to a shelter and find a gem.

That seemed to be a rare case.  My dog was with me ALL DAY, EVERY DAY.  She sat in a car 6 hours a day some days.  But, when she got out of the car we went on adventures.  Most times it was nature, other times it was urban; she became well versed in various environments, around different people.   She would sidle up next to almost anyone, but building dog relationships was harder.

She wasn’t ordinary.  She was extraordinary.